First things first – it is insanely stuffy and hot in my apartment. not so hot outside at the moment but in here, yes. Possibly a result of the oven being on while I made peanut butter chocolate chip cookies. Regardless, I have my fan pointed directly at me and on high.

Second things second. Last weekend Adam, Mira and I went to Lake Monroe for a few days to hang out and fish a little on his parents boat. Being outside and away from the city (I know “city”, right? As if Indianapolis is a huge bustling metropolis) did wonders for me. That weekend everyone arrived at camp for orientation so the potential for me to sit and wallow in I-miss-camp-pity was very, very high. But the most amazing thing happened. I didn’t want to be at camp once, not for one minute. Even when Mary texted me that she was at the Black Rose, a bar we frequented in Hendersonville. As Adam and I sat on the boat and looked at the stars I realized that I’m incredibly happy right here. This, referring back to a previous post where I wondered if, even though I’m generally happy with my life now, I would always want to be somewhere else too. I don’t want to be anywhere else but here. I’m home and even though I miss everywhere I’ve been and called home in the past and all my friends in those places, here and now is so good. This might be the best feeling ever. Not to say that I don’t have shitty days where I want to crawl under the covers and never come out, but I do come out. A few quick pics from our lake trip.

Me and Mirabelle on the boat 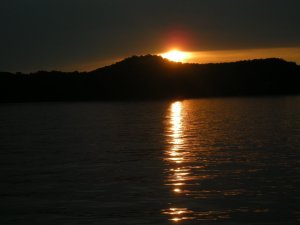 Third things third. Last night Sam and I attended the most bizarre party we’ve been to in awhile. It was something like a dream. My friend Elizabeth is an intern at the magazines and lives downstairs in my building. The party was a housewarming party she threw. The crowd was, generally speaking, all under 21, including a 15 year old. Now, I am not being condescending here. Oh my God I am so much older than these kids. They just seemed so young. In attendance was a girl who I’ll call MK. She was everything that, two years ago, I would have longed to be. She was effortlessly cool, wearing a black tshirt, a brown fringed jacket and tight dark jeans and discussing how she doesn’t pay for spices at the store, eats donuts and doesn’t pay for them, and carries her lighter between her breasts and down her shirt. I literally would have watched her all night and been intensely jealous and completely judgmental of her in my insecurity and lack of self confidence. Last night I watched her and smiled because her coolness is not effortless, but quite the opposite. Part of me wanted to judge her, just out of habit. At one point everyone gathered around a piece of meat, called star meat, and performed a ritual. Star meat seemed to be meatloaf in the somewhat shape of a star with sprinkles and candles stuck on it. They all stood around the lit up meat and chanted “star meat star meat!” until MK, who was in charge, shushed them all, at which point they blew out the candles and ate the meat. Weird. Like I said, a somewhat dreamlike night that reminded me of what I used to wish I had and was and of how happy I am that I somehow found my self confidence between then and now. Anyway I’m glad that Sam was there with me because the whole night was something of a flashback to Bloomington and our neighbors senior year.