First of all, did you know Jewel has made like four or five albums since her first one in the 90s? Pieces of You was one of my first CDs (along with Dave Matthews Band, Crash). I recently heard Foolish Games on the radio and suddenly got a Jewel craving. So now I’m listening to that album on LaLa.com. But the song Pieces of You, kinda disturbing!

You know what I miss? Mixed tapes. Mixes on CDs just aren’t quite the same. There’s nothing quite like sitting by your boom box, waiting to hear a song on the radio so that you can hit the record button, and inevitably get some of the DJ chatter at the end of the song on the tape too.

The most exciting thing that happened to me this week involved my plumbing and pasta in my bathtub. On Tuesday the kitchen and bathroom sinks started to drain slowly. I then discovered that not only were they draining slowly, but they were draining right into my bathtub! SCORE! I tried Drain-o and plunging but no luck. Pretty soon my bathtub was a log of what I’d eaten in the past week. Good thing I don’t care much if I don’t get a shower ever day, or for three days.

Well, I’ve managed to get sick three times in the past month, which is pretty rare for me. Cold, Norovirus (which is the most hilarious and gross stomach bug EVER), cough/fever. (By the way Foolish Games does not sound pretty when sung by someone who is on the verge of losing her voice. Worst sound that has ever come out of my mouth.) I’m hoping for a healthy February. So not much cooking or baking has happened. I did make some black bean soup and corn bread earlier this week though. The soup was so so. The corn bread was fabulous. I want to make it again with chili.

The recipe calls for milk or buttermilk. I don’t drink milk and really only use it in baking, substituting soy milk most other times. And usually it works out fine. I’ve made some damn good gratin potatoes with soy milk. The only thing I’ve had trouble with is alfredo sauce. My body cannot handle all that heavy cream but oh good Lord I love alfredo sauce. Soy milk, in my experience, when heated up and subbed for heavy cream in this case, gets sweet, and alfredo sauce should not be sweet. Does anyone have any tips on cooking with soy milk or other dairy substitutes? Anyway, back to the corn bread. I didn’t have milk and was almost out of soy milk. I did however have heavy cream for some weird reason, so used that instead. No need to do that I’m sure. I’d stick with milk or soy next time. 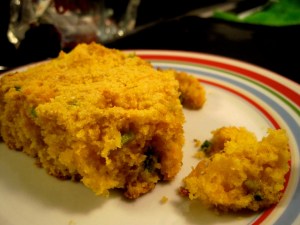 Preheat the oven to 375°. On the stove, put the butter in a medium oven-proof skillet or an 8-inch square baking pan over medium heat, (I used my fabulous cast iron skillet. Bam!) until hot, about two minutes, then turn off the burner.
While the butter is heating (and probably after you’ve turned the butter off. I’m not a fast combiner), combine the dry ingredients in a bowl. Mix the egg into the buttermilk/milk/milk + vinegar/soy milk. (oh the options!) Stir the liquid mixture into the dry ingredients, combining well. Add the jalapeno and cheese. If the batter is too dry, add another tablespoon or two of milk.
Pour the batter into the pan of preheated butter, spread the batter out evenly, and slide it into the oven. Bake for about 30 minutes or until the top is browned and the edges have pulled away from the pan.