This past Sunday Adam turned 28. A month or so ago we were talking about cake and he brought up the idea of an Almond Joy cake, how I should try to make one, and how it should have coconut in it that had been chopped up really small, like in a food processor. I immediately cataloged this into “Possible Birthday Cakes.” 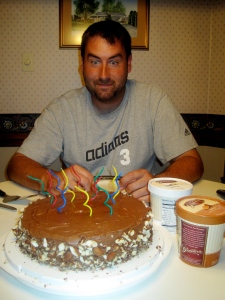 After extensive searching online, the only recipes for an Almond Joy cake were cop outs that used the candy bar, and those were few and far between. So I started brainstorming. Chocolate cake with coconut icing? Coconut cake with chocolate icing? Then one day this cake (Billie’s Italian Cream Cake) from the Pioneer Woman popped up on my  Google reader. It looked incredible and she spoke…err wrote…so highly of it, that I decided to make that the cake. It’s topped off with chocolate icing, the recipe for which came from the woman who cooked and cleaned for my grandparents, and, after around 40 years, became part of the family. Her name is Mattie and oh Lord can that woman cook. Anyway, cake recipe’s after the break!

1/2 cup to 1 cup coconut, chopped up in food processor

Preheat  the oven to 350°. Grease and flour two 9-inch round cake pans. 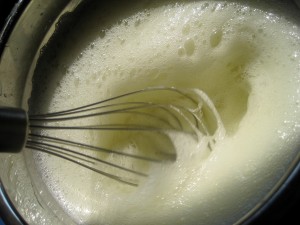 In a large bowl, cream together butter, oil, and sugar until light and fluffy. Mix in the egg yolks, vanilla, and coconut.

In a separate bowl, mix flour, baking soda, and bak

While the cakes are cooling, put all th

e frosting ingredients into a medium bowl and beat them together until you get a nice, creamy frosting.

OK, here are some frosting tips I picked up from Deb at Smitten Kitchen. First, pop your layers into the freezer. They’ll be way easier to frost slightly frozen. Second, do a crumb coat. Here’s what you do.

Spread a thin layer of frosting over both layers of cake. Put them in the refrigerator for maybe half an hour to let the frosting get hard. This layer doesn’t have to be pretty; it just serves as kind of a protective hard coat that keeps your cake from crumbling and breaking up when you frost for real.

So, now take the layers out of the fridge. Frost the bottom one for real. Sprinkle the food processed coconut on top of the frosted bottom layer. Add another thin layer of frosting over the coconut layer.

Place the second layer on top of the first and frost it. I pressed some crushed, toasted almonds to the edge of the cake, just to

complete the Almond Joy feel. It didn’t add to the flavor too much though.

And there you have it! I especially like the pretty candles.

There was an error retrieving images from Instagram. An attempt will be remade in a few minutes.