About a month or two ago my grandfather spent some time in the hospital. First of all, Papa is 94 years old, but a kickin’ 94. He drives, goes out to dinner often (twice a week to a restaurant in town called Taste where he always sits in favorite waitress Anna’s section), remembers waaay back to his childhood, and still tells the longest and most incredible stories (some of which we’ve heard 20 times). He’s also had heart and blood pressure issues off and on, so seeing him in the hospital isn’t a terribly strange thing. And he always bounces back.

Papa and me lighting candles for his 94th birthday

This time he was in for lump reasons, which turned into tumor reasons. So, for a while when he first got home, understandably, he was bummed out. A lot. He’s bounced back, yet again, and is doing well now. My first reaction when Mom told me he could use some cheering up was “let’s bake him something!” Obviously, right? I’d recently made these incredible brownies, Rick Katz’s Brownies for Julia, from Dorie Greenspan’s cookbook Baking: From My Home to Yours, and they were out of this world. 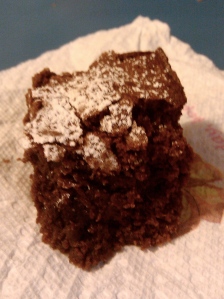 In fact, they tasted almost identical to the brownies Papa’s cook Mattie always made. Those were the brownies of my childhood. Gooey, chocolatey, and dusted with powdered sugar. They’re probably Papa’s favorite brownies. He loves Mattie’s cooking. LOVES it. So, I made him a batch. And he fell for them. So hard in fact that the next week he was asking me when I was going to bring more over to his house.

So here’s the recipe, slightly tweaked, and renamed Papa’s Brownies.

Papa's birthday cake: Mattie's chocolate cake, as made by me

Just a warning, these are so good you may eat half the pan in one sitting. I ate two for lunch just the other day.

Preheat the oven to 350. Spray a 9-inch square baking pan with Pam.

Whisk the flour and salt together in a small bowl.

Fill a saucepan a big full of water, set a large bowl on top of it, and turn the heat onto medium-low to bring the water to a simmer. Put the chocolate and butter into the bowl. Stir frequently until it’s all melted.

While the chocolate and butter are melting, put 1 cup of the sugar into a medium bowl and whisk in the eggs.

When the butter and chocolate have melted, gently whisk in the other 1 cup of sugar. Remove the bowl from the saucepan and stir in the vanilla and alm

Using a rubber spatula, slowly add half of the sugar-egg mixture. Stir continuously so the heat from the chocolate doesn’t cook the eggs. (I haven’t had this happen but Dorie warns about it.)

Put the whisk attachment on your mixer and beat the remaining half of the sugar-egg mixture on medium-high speed for about 3 minutes, or until it’s doubled in volume. Using the spatula again, gently fold the whipped eggs into the chocolate mixture. Stop just before you blend them in entirely. Sprinkle the dry ingredients on top of the mixture and fold them in until they just disappear.

Pour the batter into the prepared pan.

Bake 35 to 40 minutes, or until the top looks dry and the edges start to pull away from the pan. This is where things got tricky for me. The brownies should only just be set and the center should still be gooey. Thirty-five minutes wasn’t quite enough for my taste, but the brownies were actually cooked enough. So I think it depends on just how gooey you like your brownies.

Transfer the pan to a rack and cool to room temperature. Dust with powdered sugar. Cut these brownies straight from the pan. Or eat them directly out of the pan with a fork.

Leave a Reply to Fairy Princess With An Edge Cancel reply