Yesterday was hard. The first week Michael was gone was hard. I cried a lot. It was kind of like going through a break up all over again, but this time I had a kind and wonderful supportive boy to comfort me, instead of one to feed me crap lines like “this is the hardest thing I’ve ever done.” (What’s up with that anyway? I heard someone say that on TV, ahem Dawson’s Creek, today, and thought why do people say that? If this was really the hardest thing you’d ever done, would you be doing it?) So I sat around feeling sad for a week.

Then things got better. They just…did. Nothing in my life changed. Mike is still in another country. I’m still here, my life sort of on hold, sharing my bed with two girls (sexy, no?).

But things got better.

Then yesterday hit. Like a fucking bag of bricks.

Yesterday the Jew in me welcomed the new year. Shana Tova! This year for the first time the days leading up to Rosh Hashanah were filled with anticipation, the kind you feel before Christmas. I think this has to do with the fact that I work at a Jewish organization now. The office was filled with people wishing each other Shana Tova, discussing holiday plans and meals, and talking about what they would do with their two days off. That’s right, I didn’t work yesterday or today. I couldn’t wait to spend the days contemplating the last year and looking forward to the new one. But then I spent Monday alone. Which would have been fine, but alone means lonely these days, too. And what with the holiday and all and the condescending little prick of a college “super senior” who sat down next to me at services, I just couldn’t handle the aloneness.

Now, I am not even here to complain. Guys, I’ve got it damn good. I don’t have to hide my religion, I get to celebrate it freely. I have a loving and loyal boyfriend who, despite living far away, gives me confidence in our relationship every day. I just. Fell. Into one of those huge holes, the kind where the bottom is really far away from the top, even though you can see the top, the bright blue sky, clearly. You just cannot climb out of that damn hole.

So you sit in there at the bottom and you wallow. Oh man, does wallowing feel good sometimes, right? And you wonder how you are a functioning adult and how you manage to get out of bed in the morning. And then you move to the wallowing part where you wonder why you don’t have kids yet. And just because you haven’t been having unprotected sex and pumping small humans out of your vagina doesn’t mean you haven’t been busy. And then you imagine what you’ll say next time someone asks you, “So what’s new? How’s it going” You’ll say, “well, i got out of bed today, and i’m much more self-aware, and i haven’t cried yet today,” or something equally brutally honest like that.

So whatever. I had the world’s saddest wallow-fest at the bottom of a big hole. The end only came after I had sat in the bathroom and cried, big hysterical ridiculous gaspy cries, for 15 minutes. Then I was suddenly near the top of the hole. Sometimes it just takes a good cry, right?

Sometimes it takes a good cry and a good apple crisp.

I haven’t indulged in making baked goods in awhile. Trying to, you know, keep that cholesterol down by avoiding butter. But suddenly I just had to. I turned to my Joy the Baker Cookbook, the chapter called “i need a hug, or a brownie. maybe both.”  I have this bowl overflowing with apples from the farmer’s market. Lola Kitty was suspicious at first. 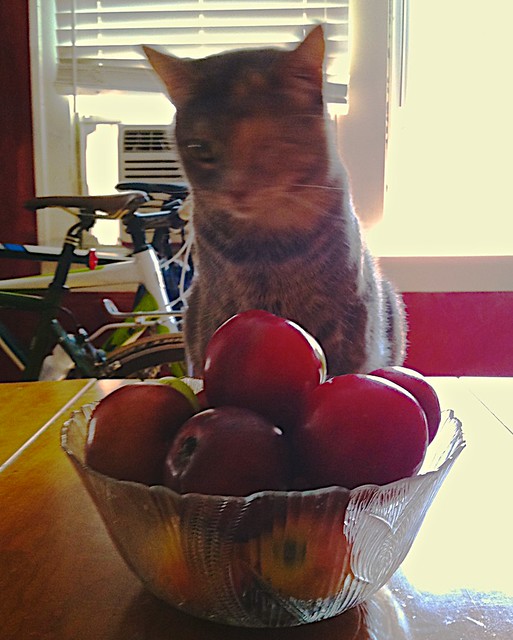 Then I turned the apples into an amazing crisp. Lola Kitty approved.

This crisp is more or less like an apple pie without the slightly time-consuming crust. (Even I will admit that a crust can be a hassle when all you want is some buttery comfort.) It bakes up nice and cinnamon and sugary with a crispy, slightly oaty topping. And it’s called “man bait” apple crisp. And as I stood in my kitchen blending butter, flour, and sugars together with my hands, I sighed. This is right. This feels so good. Thank God for butter and sugar.

So, maybe you’re in a hole. Maybe you need to catch yourself a man. Maybe you have too many apples from the farmer’s market. Make this dang apple crisp. And watch Joy make it in St. Louis in this video JTB apple crisp.

Things get a little weird. Obvs. We’re talking about Joy. Though she does have the talk show host “sewn up” …. and there’s even a Ghost reenactment. This is why I love Joy. She’s hilarious and weird and normal and lovely, and that’s how she is in real life. I met her.

Preheat the oven to 350° F. Grease a 9×9 inch pan with butter, shortening, or cooking spray.

Peel and core the apples, and cut them into 1/4-inch thick slices. Mix together the sugar and cinnamon in a small bowl. Put the apples into the baking dish, and sprinkle them with the cinnamon and sugar mixture. Toss to evenly coat. Set aside while you make the topping.

In a large bowl whisk flour, brown sugar, cinnamon, nuts, and oats. Work the butter into the dry ingredients with your hands by rubbing the butter pieces into the flour mixture. This will just break the butter down and mix everything up. Keep combining until the mixture resembles coarse meal. Sprinkle a heaping one cup of the topping over the apple mixture, and toss everything around with your hands to mix. Evenly, spread the rest of the topping over the apples.

Bake the crisp until the topping is toasted and the apples are bubbling, about 50-60 minutes. Remove from the oven, and let cool slightly.