Let’s be honest for a second. Is that OK? I’ve sat in front of my computer about fifteen times in the last week and a half staring at the big, blank “Edit Post” screen. I’ve typed a bit. I’ve brainstormed a bit. Mostly I’ve just felt anxious as more time passes and my planned birthday cake post goes unpublished. Unwritten, really. Nothing is coming.

I want all this inspiration in the start of the new year. I’m really thankful that my friend Sam got me this really cool journal, 642 Things to Write About, because I want to be inspired, but in small and not overwhelming doses. I want to plan big for 2013, but big plans give rise to anxiety. I did make one successful plan: I signed up for a marathon in November. A mother fucking marathon. Oh shit.

This is the year I turn 29. One more til 30. Instead of resolutions I’m making a 30 before 30 list. Thirty things I’ll do this year. Number 26: Run 26(.2) miles by completing a marathon. Number four: Send flowers to four friends. Number 12: Go to shabbat services 12 times. Number 20: Take pictures of 20 of my favorite things. Do you have any things to add? I need helping filling in the numbers. I’ll post my whole list next week, after the birthday happens.

Birthdays come with cake. Always cake. My favorite part of birthdays. I love making cake for other people. 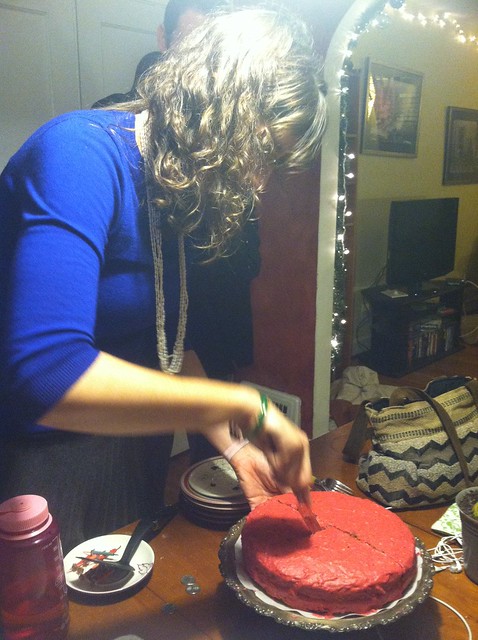 I hate asking other people to make me cake. I always lust after these complicated layered things, covered in frostings, drenched in flavored syrups. And it’s not that I don’t trust my friends to come through, I just feel bad asking for something complicated.

After all, a birthday cake should be filled with a good, joyful energy that you bake into it. Not a stressed out, this will never live up to expectations energy. In reality, I’m a fan of a simple cake, a cake with good flavors, one that I can even make on a weekday, because sometimes that’s when birthday celebrations happen, but that looks and tastes dang fabulous.

One that I am proud to put on my pretty silver cake stand, but that didn’t take hours for me to make, because, after all, we are busy. It’s a fact of life. But that doesn’t mean we don’t want to shower cake on our loved ones on their birthdays. So, simple and lovely cakes for busy people who are looking in every corner for simple inspirations and have birthdays to celebrate!

A few years ago I called Mattie, who has retired and is in her 90s, and asked her for the chocolate cake recipe. It’s perfect, even still today. This is a chocolatey cake without being intense. It’s sweet without being overwhelming. It’s not dense or moist, it’s light and friendly and easy. It’s made with pieces of chocolate, melted, instead of cocoa powder, which seems to be fashionable for chocolate cakes. Mattie always frosted hers with a milk chocolate frosting that I absolutely love. 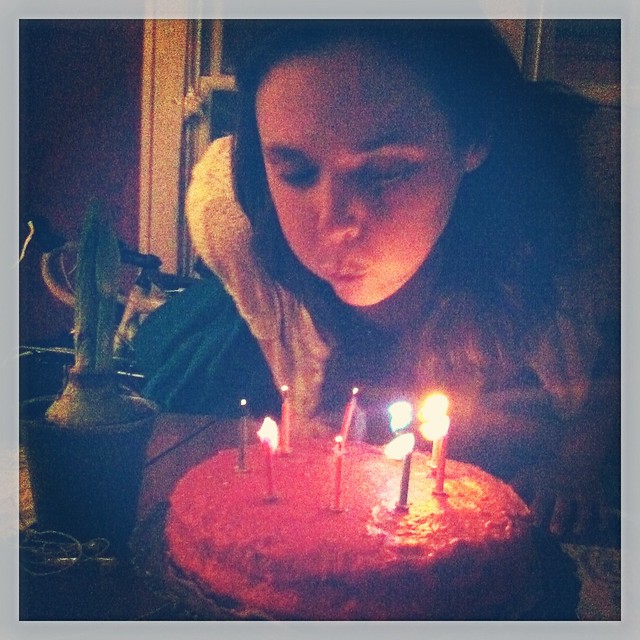 For this birthday, though, the birthday girl (one of my best girls, Marnie) had requested something with raspberry, so I found a raspberry buttercream. Holy hot pink awesome frosting! Girly, tangy, and perfect.

Fill a pot with about two or three inches of water and bring it to a simmer. Put the chocolate in a heatproof bowl and set it on top of the pot. Let the chocolat melt, stirring occasionally. Set aside to let cool slightly.

Cream the butter and sugars with an electric or stand mixer on medium speed. Sift the flour, salt, and baking soda. Mix into butter and sugar mixture on a low speed. Add eggs one at a time, mixing in between each egg. Add milk, sour cream, vanilla, and chocolate.

Divide batter into the two prepared cake pans. Bake for 30 minutes, checking at 20 for doneness with a knife. When the knife comes out clean, take the cakes out and set them on a rack cool for 15 minutes in the pans. Carefully remove the cakes from the pans and cool completely before frosting.

While the cake cools, make the frosting. Puree the raspberries in a food processor. Set aside. Beat the butter in a large bowl until light and fluffy. Beat in the sugar 1 cup at a time, beating well after each addition. Add the raspberry puree and beat until fully incorporated.

If you are a traditionalist and prefer to make this cake chocolate on chocolate, here’s the chocolate buttercream recipe!

Melt the chocolate over a pan of simmering water just like you did for the cake. Beat the butter until light and fluffy. Beat in the sugar 1 cup at a time. Add the melted chocolate and milk and beat until just incorporated. Frost away.

One thought on “Birthdays. Chocolate Cake with Raspberry Buttercream.”