First of all, how did I just discover 101 Cookbooks? I’m going to spend the rest of my day reading over her entire site and absorbing all of her natural food and cooking information. OK, maybe not all day since I am at work.

Second of all, I watched Food, Inc. over the weekend (which was almost a week ago, I realize). A very eye-opening documentary about the food industry in this country, and it made me incredibly thankful to have local, conventional or organic produce and groceries, and grass-fed, local, ickiness-free meat at my fingertips. Thanks Farm Fresh Delivery and Goose the Market! You make me feel good about what I shove into my mouth every day. Tehehe.

Thirdly, make this pie. This pie, this pie. It’s all kinds of sweet-tart summery goodness. And the only oven-turning-on you have to do is to blind bake the crust! Which, let me just tell you, is a HUGE plus when outside felt like 100° for two weeks straight. 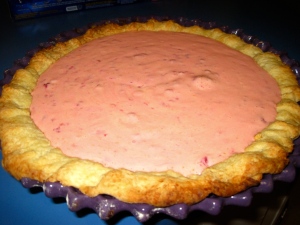 the lighting in my kitchen sucks, remember?

What you should really be paying attention to here is the crust. Remember how we made a pie in North Carolina with vodka in the crust? That’s the basic recipe I used here, but I changed one thing.

Meet the flakiest artery-clogging mothaheffah around

Oh yes. That, my friends, is lard. A tub of lard. I have a tub of lard in my fridge, just hangin out. I bought a tub of lard at Kroger (but I went through the self-scan because I was too embarrassed to let anyone ring up my lard). About this lard. It’s not vegetarian. Duh. It’s a tub of animal fat and not the best thing for you. But, BUT (butt) it makes the damn flakiest pie crust I’ve ever tasted. So, I suggest you give lard a chance if you can stomach it. You will be blown out of the water.

I probably will only use lard when my kitchen is too hot for butter, because all-butter crust is like a tiny piece of heaven. But I’m never going back to a Crisco-butter combo. Sorry, Crisco.

Another quick note. If you’re a bit nervous about rolling out pie dough because it’s sticky and whatnot, this vodka recipe is perrrrrfect for you. Who’m I kidding, it’s perfect for anyone making pie crust. The vodka makes the dough so malleable and easy to work with that you’ll think you’re rolling out Play Doh. Plus you can drink vodka ice teas while you bake.

OK, so on to the pie recipe.

I did not do this, but I think whipped cream on the top of this pie would be delicious. Don’t buy whipped cream already made. Do it yourself. Super easy and tastes literally fifty times better. Recipe: In a bowl, mix with an electric mixer 1 cup heavy whipping cream, 2-4 tablespoons powdered sugar, and 1/2 teaspoon flavoring like vanilla. Beat until soft peaks form and you get a nice whipped cream consistency.

Vodka Pie Crust (with lard and butter…see all-butter version)
(makes a double crust, which means you’ll have to make another pie soon)

Start with the crust. Mix the flour, salt, and sugar together in a medium bowl.

Cut in the cold butter and lard using either two knives or a pastry blender. You want the butter n lard to end up in pea-sized pieces.

Sprinkle the vodka and water over the flour-butter mixture and mix with a wooden spoon. You want your dough to come together and hold together. It shouldn’t be too dry, nor should it be too sticky and gooey. Add liquid until you reach a nice consistency where the dough holds its shape in a ball. 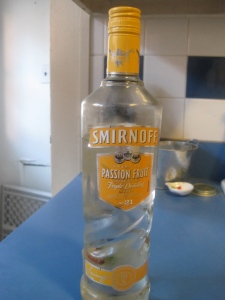 Split the dough in half. Put one half in the bowl, cover with plastic wrap, and let it hang out in the fridge for about a half an hour. Put the other half in a plastic freezer bag, label and date it, and put it in the freezer.

Now we blind bake our crust! This is what you do when your filling does not need to be cooked. Obviously your crust does.

Preheat your oven to 400°. Flour your counter top. Roll out your dough, flipping it over every few rolls to keep the dough from sticking to the counter top.

Gently set this bottom crust into the pie pan. Fold over the extra dough and crimp up the edges. Cover the crust with a piece of aluminum foil. Fill the pie plate with either pie weights or dried beans. You won’t be able to cook with these dried beans again, FYI. I use dried split peas 🙂

Bake the crust for 25 minutes. Remove the pie weights and foil and bake for another 10, until the crust is golden brown. Remove from the oven and cool completely.

Now for the filling. You’ll need a thermometer. I don’t have one. It’s on my “when I have lots of money again I will buy these kitchen gadgets” list. I do have some plastic, one use chicken testers. They turn red when your chicken (or lemon cream) reaches between 170° and 180°. Perfect.

Set the bowl on top of a pot of simmering water and cook, stirring with the whisk as soon as the mixture feels tepid to the touch. You want to cook the cream until it reaches 180°. Whisk constantly to keep the eggs from scrambling. The cream will start out light and foamy, then the bubbles will get bigger, and then, as the cream is getting closer to 180°, it will start to thicken and the whisk will leave tracks. The tracks mean the cream is almost ready. Keep checking the temperature. This can take as long as 10 minutes, so be patient.

When the cream reaches 180°, remove it from the heat and let it cool down for 10 minutes.

Poor the cream into a blender, turn it on high, and add the butter, about five pieces at a time. Once all the butter is in, keep the blender going for three more minutes.

Mash up the raspberries and gently fold them into the cream. 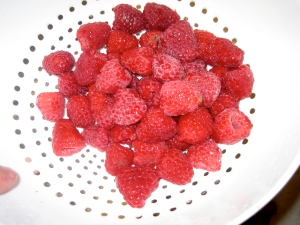 Pour the cream into the pie crust. Top with whipped cream. Refrigerate overnight.