It’s fall!! Does a season require capitalization? If so, then…It’s Fall!! I celebrated by drinking lots of hot tea and making chai tea cupcakes. The cupcakes are pretty good. Not fabulous but the icing is phenomenal. Plus, I think they’re pretty! 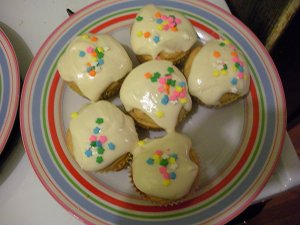 The recipe is from a cupcake book Sam let me borrow. 500 cupcake recipes. I foresee much baking in my future.

In other photo news, we played dress up with one of my boss’s dogs last week. Toby makes a very lovely princess, don’t you think? I hope we haven’t contributed to any gender confusion on his part…though I have a feeling he’s already confused since his dog buddy Yoda humps him.

As of tomorrow I am officially moving out of my parents’ house for good. I’m sure I thought that very thing as I got onto I465 last November, my car packed full of my things, and headed down South to the land of the pines. This time I do mean it though. I’ve got a nice little apartment downtown in a cute historic neighborhood called Woodruff Place. There are trees and fountains down the center of the streets and a town hall where neighbors still hold meetings and plan events. I have grand plans for this apartment. Life will be good. No, scratch that, life is good. Mmmm I like being able to say that, though now I’ve certainly jinxed myself.
The job is good. I’m learning a lot about the inner workings of a magazine while randomly floating around. A small sample of how we spend our days: 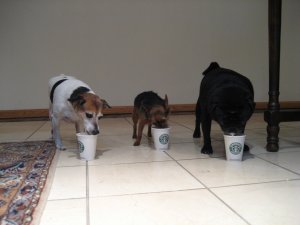 Those are my boss’s dogs, who accompany her to work every day, eating whipped cream from Starbucks. Other things that have been discussed include killer midget’s with boxcutters jumping out of the trees downtown to kill innocent bystanders, penis ties and pictures (this was in an art contest meeting for the children’s magazines), the fact that I got a doggy penis stuck in my face (the smallest one in the middle above) and facebook.
I leave you many (and by many I mean few) readers with an excerpt from a Jamie Cullum song that I feel is fitting to my mood these days.

It’s just another story caught up
In another photograph I found.
And it seems like another person lived that life a great many years ago from now,
When I look back on my ordinary, ordinary life,
I see so much magic, though I missed it at the time.

vanity fair has the best horoscopes hands down. they include the effect of planet positions, which houses they are in and where they are on your chart. of course i am a believer in horoscopes so vanity fair’s is like a double win for me. this month mine reads,

“AQUARIUS
naturally you’re a bit restless these days. you’re a wild bird, not some parakeet that gets let out of its cage only to cling to somebody’s arm. when saturn transits the western horizon, however, you’ve got to get over your desire for complete independence and accept the fact that you want company. while you know damn well that the only person who’s going to take care of you financially in your old age is you, the fact is that you get spooked when you’re left alone. maybe there is a touch of parakeet in you after all.”

it’s true. i’m a parakeet underneath my wild bird exterior but i hate admitting to it. one of my better personality flaws to come out since i’ve moved away.

we’ve started getting lots of regular early morning coffee drinkers at work besides our 3 0r 4 regulars. i like our early morning regulars because they don’t chit chat. i do not want to make small talk with you at 6:30am. come back in two hours. one of these is a european gentleman. he speaks in a fairly heavy italian accent, wears a leather jacket over his shoulders and uses copious amounts of hairgel. he orders an espresso. this morning i suddenly saw him standing outside, smoking a cigarette and knocking on our window, obviously trying to get my attention. when i looked his way he signaled two with his fingers. confused, i walked towards the door to see what he so desperately needed as he continued to flash the two fingers. he beat me to it, opened the door and said “i want a double espresso (hence the two). i forgot that you don’t allow cigarettes in the cafe here and lit one right before i came in.” ok fine. the smoke in cafes in europe. apparently they leave their manners outside though. this is not a drivethrough fool. i do not take your order while you stand outside. i was a bit cool when he did come in and i think he noticed. he was very complimentary of our espresso (delicious. even better than in italy.) and i hope he felt at least a little bad.

i wandered over to guster’s website today (i’ve been doing a lot of this kind of wandering today because i have no car to go run errands such as the groccery and the post office or start my new tutoring job) and found a new road journal entry. i’m posting the link here in hopes that you’ll read it. one because it’s guster and even better brian writes and is highly amusing. two because there’s mention of the ncaa tournament. three because there is mention of passover. four because there are silly drawings of the band and crew members. http://www.guster.com/. you have to click on the link to the left that says “road journal”. check it out.
in other news i’ve discovered the downside of being a grown up. i said i wanted responsibility and i still do but it doesn’t feel as good and liberating as i had hoped.
in other other news i’m going home this weekend. i’m thrilled and cannot wait to see my family and hopefully get down to bloomington.
my quote of the day, “there are two kinds of animals in this world, dogs and cats. kind of like there are two kinds of people, indie and new age.” {casey, the morning times manager}

i was literally about to curl up in bed and take a nap and on cue someone started cutting the grass outside my window. now, thanks to the loud motor noises, i will surely not be able to sleep. and right now all i want is to disappear into a nap for a bit. i was hoping for a refreshing weekend and it started off just that way. i think i came out the other end just as baffled and unsure as i went in. i had my first week of personal training sessions (yes the gym is sucking money out of me like it’s their job. at least i’ll be hot. um i mean in shape…) scheduled for 4:30 this week thinking that i was done with louisburg tutoring. i came home from work this afternoon, sat down on my bed and my phone rang. of course it’s never the phone call that i want, but the very opposite. etta holmes calling to ask if i can just tutor for this one last week because she’s having trouble filling my spot. and beause i’m a sucker and a pushover i say yes. so, now i have to call rodney the personal trainer and ask him if i can reschedule. and we all know how much i hate making phone calls to people i don’t really know. i’m putting it off. i need to plan out exactly what i am going to say, especially if i have to leave a voicemail. i’ve been planning out lots of conversations in my head. the other most important one i am trying to work up the courage to have. i’m just not sure it’s necessary anymore and if it is still then is it a good idea at all? i don’t want my happiness to depend on someone else and i do want to find the courage to tell that someone else how i feel.

the neighbor cats are fighting loudly below my window. not the first serenade i’ve gotten since i’ve been down here but sadly the most recent one. i’d rather it be “you’ve lost that loving feeling”.
i’ve recently felt like i’m living two days in one. the first consists of the coffee shop and i have no complaints. the second has me driving an hour there and an hour back for only two hours of actual work. this is my tutoring job and it’s a pain in my ass that will soon be gone. i spent lots of time discussing the pros and cons of this second job (mostly with myself on my drives to and from said job). i enjoy some of the kids. i liked tutoring reading. i dislike a lot of the kids. they’re disrespectful, calling me “ma’am” in a sarcastic tone, they don’t try and disrupt the class. the drive is a monumental Pain In The Ass and gas prices are going up. i just don’t feel that it’s worth my time. and i’m generally cranky whenever i think of going. so i’m done. i really hate quitting but i think my sanity and happiness are at stake.
in other news i’m afraid i’m being used. or that all parties involved are confused and unsure. ugh i’m too exhausted to be thinking about this crap (again…). it’s 10:30 and time for bed.

i have decided to leave my not so emo but emo by default livejournal past behind and get a grown up blog. that doesn’t make sense i realize but deal with it. besides i like fresh starts and since i’ve moved i’ve been all about fresh starts.
i’m opening at the coffeeshop every day this week but tomorrow. this requires me to set me alarm (or rather alarms because i started turning off just the one in my sleep) for 5am and 5:25am in order for me to drag myself out of bed, brush my teeth and get dressed in a half asleep fashion. all just to park my car 5 blocks from the store and walk through the sketchy part of downtown before the sun comes up. i’d honestly rather work in the mornings though because then i have my whole day in front of me when i get off at noon. or i have small and sometimes sticky children to teach maths to, except that i have no idea how to teach maths. but that’s a whole other story. plus i do thoroughly enjoy seeing the same customers every morning and guessing in my head what they want. last week a man came in who orders a latte every day. only he looks a lot like a man who orders a “grande caramel latte, extra hot” so when he said “i want my regular, can you guess what that is?” i said, “uummm, large coffee?” so now i keep my guesses to myself.
i do have two trips to look forward to coming up: going home at the end of march and going to chicago with bette for our “spring break” to visit marnie and meredith.
and now i’m going to help bette write a paper!!!! this, sadly enough, makes my night. my secret’s out, i love writing papers.